Congratulations to Luke Yarbrough for being selected February Athlete of the Month for Fairview High School and Encore Rehabilitation-Cullman!

Luke is a Senior with plans to pursue a degree at Wallace State Community College and then Athens State University in the field of Education, specifically working with special needs students. During his time at Fairview, he has played Basketball and Baseball for the Aggies. Luke has been named All-County and All-Area. He has also received the 1,000 point ball. In his free time, he enjoys hanging out with his friends and family.

Luke is the son of Wesley and Christi Yarbrough.

We are proud of you, Luke! We wish you the best! 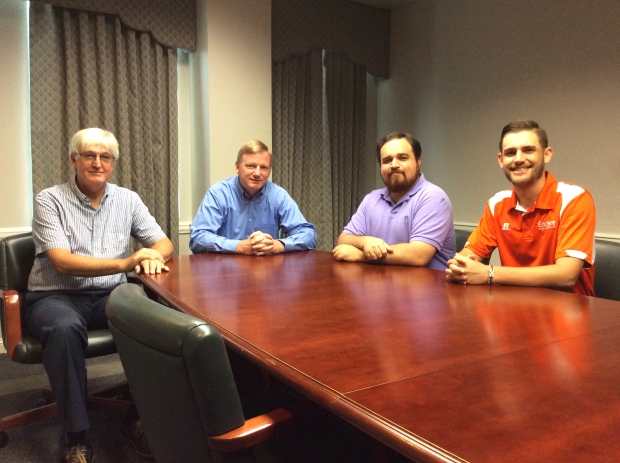 Encore Rehabilitation, Inc. would like to introduce you to our Accounting Team! Perry, Thomas, Phillip, and Johnny help to keep our operations running smoothly and we are thankful for their commitment and professionalism. From producing financial statements to maintaining balance sheets, as well as administering payroll and managing equipment inventory, we could not ask for a finer Accounting Team. Thank you, gentlemen for all that you do!

Perry Baker-Chief Financial Officer (Far left)
Perry is a graduate of the University of North Alabama with a Master’s degree in Business Administration. He has been with Encore Rehabilitation for almost six years. He enjoys playing tennis and is the father of two children.

Philip Whaley – Staff Account (Third from left)
Philip earned his Master’s in Accounting from The University of Alabama in Huntsville. He has worked with Encore for three years.  Philip is a movie and sci-fi aficionado.

Thomas Holt – Staff Accountant (Far right)
Thomas is graduate of  the University of Alabama with a Bachelor’s degree in Accounting. He has been with Encore for seven years. In his spare time, he enjoys bowling, playing tennis, and traveling.

Encore Rehabilitation, Inc. is pleased to introduce you to our Accounts Payable/Purchasing Department! Craig, Kevin, and Brittany develop and maintain great relationships with vendors and suppliers to ensure Encore operations run smoothly. They also assist employees with reimbursements, purchases, and questions. Their dedication and commitment to excellence is evident in everything they do. A huge thank you to our FANTASTIC Accounts Payable/Purchasing Team!

Kevin Capone – Accounts Payable/Purchasing Team Member (left)
Kevin graduated from Athens State University with a Business degree. He has worked with Encore for three years. In his free time, he enjoys playing tennis and working out at SportsFit.

Brittany Scott – Accounts Payable/Purchasing Team Member (middle)
Brittany is a graduate of Athens State University and has been with Encore for one year. She enjoys decorating, refinishing furniture, and shopping at thrift stores and flea markets in her spare time.

Craig Howell – Accounts Payable/Purchasing Manager (right)
Craig received his bachelor’s degree in Business Management/Marketing from Athens State University. He has been with Encore for 5 years. His hobbies include fishing and playing golf and tennis.

At Encore Rehabilitation, we LOVE to see you move!
encorerehab.com

The following is an excerpt from: Math Teacher William Booth’s Baseball Coaching Career Adds Up to Hall of Fame, By Bill Plott, AHSAA Historian. To read the complete article, click here.

It can be said that he excelled in all of them. His baseball coaching has added up to an Alabama High School Sports Hall of Fame selection for Booth, the state’s all-time prep baseball wins leader. The Class of 2018 will be inducted March 19 at the banquet to be held at 6:30 p.m. at the Montgomery Renaissance Hotel and Convention Center.

“At the age of 42, he was called on to help out Hartselle High School’s baseball team. Without any previous experience in (high school) coaching, he walked on to the field and immediately started winning,” recalled his friend Don Logan, owner of the Birmingham Barons and B.A.S.S.
Despite his late start, Booth’s 30-year career as baseball coach at Hartselle has resulted in the following accomplishments for his storied program.

He was also a Little League baseball coach for 10 years, winning two state championships and finishing second once. Booth was inducted into the Alabama Baseball Coaches Hall of Fame in 2004.

A native of Hartselle, Booth graduated from Morgan County High School in 1962. He attended Athens College and Alabama A&M, earning degrees in math and administration.

Don Logan pointed out that Booth’s accomplishments have not been limited to the baseball field. “He has also excelled in the important role of developing boys into men, and he has helped many earn college scholarships and quite a few more to sign contracts to play professional baseball,” Logan said. “Outside of baseball, he set what might be another record, teaching thousands of students subjects such as calculus and higher mathematics for 50 years. He recently retired from the classroom, but at age 73 he hasn’t quit working with young people, on and off the field.”

Dr. Dee Dee Jones, superintendent of Hartselle City Schools, calls Coach Booth “the finest example of how to coach students on all levels – mentally, academically, athletically and personally. “He continually goes beyond expectations to equip the students of Hartselle in whatever capacity he serves,” she stated in her nomination letter for his Hall of Fame selection. “During his 52 years in education – yes, I said 52 years – he has served as an advanced math teacher (49 years), Federal Programs Coordinator, Assistant Principal, Transportation Coordinator, Director of School Operations, and now as Assistant Superintendent. Over the past 30 years he has also served as the high school baseball coach. Mr. Booth has the distinct honor of being the winningest coach in Alabama.”

Coach William Booth is one of 11 inductees to the Alabama High School Hall of Fame, Class of 2018. For a complete list of other 2018 inductees, please click here.

Encore Rehabilitation is proud to provide Sports Medicine Coverage for the Hartselle High School Tigers and the Alabama High School Athletic Association.
We LOVE to see you move!

Encore Rehabilitation, Inc. is proud of our Human Resources Department for the support they give our employees. From new hires to seasoned employees, Jennie, Amanda, and Mack are always available to answer questions and treat each employee with respect.  They provide assistance with benefits, family medical leave, and more. We are thankful to have a GREAT HR Department!

Mack Haraway – Human Resources Generalist (seated above)
Mack graduated from the University of Alabama in 2015 with a major in Human Resources Management. He has been with Encore for 2 years.

Amanda Stone – Human Resources Assistant (left back row)
Amanda graduated from Troy University in 2009 with a degree in Sports & Fitness Management with Health Promotion & Exercise Science concentrations. She has been with Encore 9 years.  She is married with 2 sons and a daughter.

Jennie Foote – Director of Human Resources (right back row)
Jennie graduated from Athens State University in 1999 with a  double major in Human Resources Management and Business Management.  She has been with Encore for 8 years.  She is married with one daughter.

At Encore Rehabilitation, we LOVE to see you move!